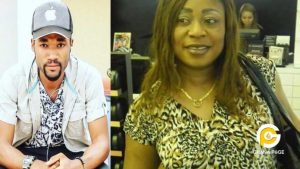 There is a trending video of a Kumawood actor and his mother fighting violently in the presence of others. Interestingly, the mother is also a Kumawood actress.

Kumawood actress, Sabby Debrah, and his son, Angelo Boateng who is also an actor is seen in a viral video fighting.

The son, Angelo Boateng went as far as calling his mother a witch. At a point, he pounced on his mother. When he realized he was being recorded, he turned his attack on the person too.

There have been varied reactions since the video hit online. Whiles others are speaking ill of the son, many others believe it’s staged by the mother and son for hype.

Knowing how Ghanaians showbiz personalities are desperate for fame and the length they are willing to go for fame, Ghpage.com can not disregard those assertions.

But, Ghpage.com is still following up on the video and we will give you more details about it soon.

We will get to the bottom and find out if it’s staged or a real fight. Stay with us for all the updates.

Watch the disturbing video below