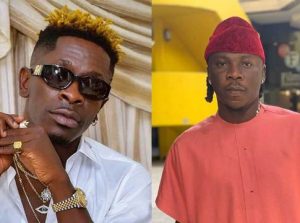 Just when we thought the beef between Stonebwoy and his long time rival Shatta Wale has fizzled out following their historic reconciliation held through a joint press conference organised on June 4, 2019 at Mariot Hotel in Accra, Stonebwoy is saying something different now.

Appearing in the studios of Okay FM, Stonebwoy said despite his new found friendship he has established with his rival, he still has some element of the beef in him and would reignite it once the SM boss makes a mistake.

When Abeiku Santana asked him if the beef has ended entirely, Stonebwoy said: “Ghanaians love these vibe indeed. But for now I’ll plead that they support our craft so that we go international with our music and rob shoulders with our Nigerian counterparts.“

He continued that: “When they support our music, at some point the beef will happen naturally. We don’t beef intentionally; it happens naturally. As for the beef there’s some still left.

I will continue to beef him. I keep scaring him. And that’s what makes the Bhim nation and SM strong. So it’s just a matter time for one to make a mistake to reignite our beef.”