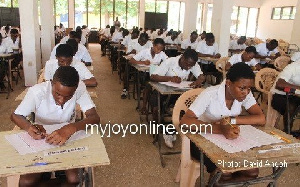 Government says it has absorbed the registration fees and cost of practical for students in public senior high schools who will sit for next year’s West Africa Secondary School Certificate Examination (WASSCE).

These candidates are the first batch of the free SHS education introduced by President Nana Akufo-Addo in September 2017.

Administrative cost for the examination has also been absorbed, a statement issued by the Ghana Education Service announced.

Parents will however bear the cost of pictures to be taken of their wards for the examination.

Director General of the GES, Prof Kwasi Opoku-Amankwa, has thus directed metro, municipal, and district directors of Education to inform heads of public second cycle schools about absorption of the fees.

He has also asked all heads of public second cycle schools to make communicate the information to the parents and guardians as of the candidates as well as stakeholders in the education sector.

Ahead of the WASSCE in June next year, President Nana Akufo-Addo in October this year urged the first batch of his free SHS education to put in hard work to pass their examination to shame critics of the popular policy.

“As you know, not everybody wanted the Free SHS programme. We had powerful sources within this country that opposed it. Some people said it was too big a drain on the country’s resources. They have even indicated that when they come into office they will review it.”

“I want you to do one thing for me – in your exams that will be held in June next year which will be the first exams for the products of the Free SHS system, use it to shame them so that everybody in Ghana will know that yes, Free SHS was a good idea”, he told the students.