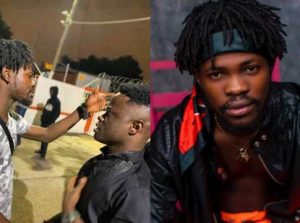 Rapper Awal Mohammed has hit back at Fameye in a new video for dissing him on radio and telling everyone that he’s a ‘Talented Kid’ as their feud ranges on.

The drama began few days ago,when Awal revealed the ‘Nothing I Get’ hit maker charged him the said amount to shoot a music video with him but failed to honour his part of the bargain when he got the money.

Fameye has responded in a brutal fashion, calling a Awal a ‘Talented Kid’ who does not deserve his attention.

He said Awal is disrespectful and foisrsomeone who extended that uncouth behavouir people like Sarkodie, he’s not surprised he’s accusing him of something he knows nothing about.

Fameye, whose interview was captured by Nkosuo TV, said he does not want to talk about the Awal issue because he has no dealings with him whatsoever.

In a quick reply, Awal said he’s surprised Fameye can betray him in this manner whiles going about spreading lies about him relative to the subject.

The rapper claimed Fameye is a very wicked person who is capable of killing a pregnant woman.